From Construmat to Beyond Building Barcelona

From 19th to 23th of May 2015, XIXth Construmat Fair, renamed as Beyond Building Barcelona, was held at Fira-Gran Vía based on four new pillars (innovation, design, sustainability & rehabilitation). BBB just like the Spanish construction industry, is trying to reinvent and adapt itself to the new local & global reality after a deep financial crisis.

Organisers have realised the need of striking a new path to build houses according to XXIth century client requirements, betting for smart building & cities where new technology and materials can be implemented. This is one of the conclusions of Mr Jose María O’Kean’s report called “Designing a new value creation cycle in construction” for Barcelona Beyond Building.

Like in the rest of creative processes (painting, sculpture, music…), in architecture, technology will have a fundamental role by the time of designing. That revolution is coming in the form of BIM systems (Building Information Modelling).

Institutions are definitely embracing this change, such that the new EU public procurement directives call on the member states to foster, specify or impose the use of BIM technologies for construction and building projects financed under EU funds by 2016. To date, UK, Netherlands, Denmark, Finland and Norway are already requiring the use of BIM for projects under public funds.

The second axis for change in architecture comes clearly led by new generation pre engineered constructive technologies. If the evolution of construction industry and other sectors such as automotive industry are compared along XXth century, we will immediately become aware of the huge difference in terms of methodology and process improvement. Even when industrialization is making its way through solid construction, a high percentage of processes are still based on semi-handmade implementations. Laying bricks one by one is not efficient, nor in time, nor in quality terms, however one looks at it. Particularly in comparison with robotised production lines such as those of any carmaker.

This silent revolution is something that is being attempted gradually, but certainly it will reach Spain sooner than later. Like in many other fields, it seems like the USA and northern countries of Europe are steps ahead of us in assimilating these new ways of constructing. Fear of change is understandable, but little by little we must make reverse the view of attributing higher features to massive construction systems compared to new systems by default.

It will be the task of companies and institutions to articulate this change towards new concepts to make a leap forward in terms of energy efficiency as well as resource consume & waste management.

The exhibitor companies of the fair, just like the winning enterprises of 2015 BBB-Construmat Awards, are a good example of this paradigm shift for architecture and construction industry. From here, we would like to thank the organization of the fair and in particular, the jury for choosing our P3 System and rewarding it with the Innovative Product/Service 2015 diploma. 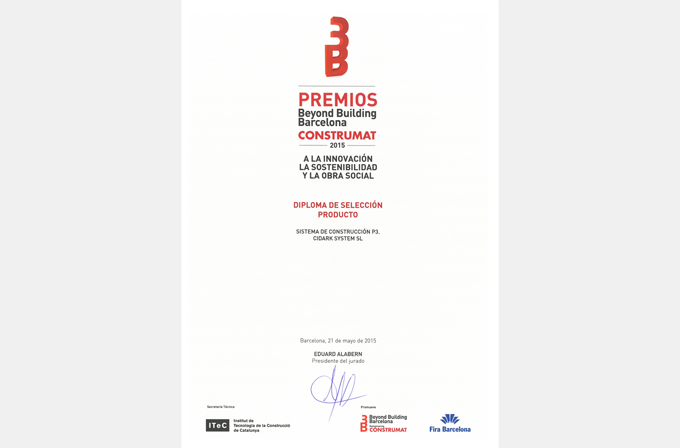 Next edition will be in 2017, a time when we will have the chance to verify the evolution of these trends and be witnesses of new applications & technologies that will make their way in construction sector.

You can find out more about which cookies we are using or switch them off in settings.

This website uses cookies so that we can provide you with the best user experience possible. Cookie information is stored in your browser and performs functions such as recognising you when you return to our website and helping our team to understand which sections of the website you find most interesting and useful.

Strictly Necessary Cookie should be enabled at all times so that we can save your preferences for cookie settings.

If you disable this cookie, we will not be able to save your preferences. This means that every time you visit this website you will need to enable or disable cookies again.

This website uses Google Analytics to collect anonymous information such as the number of visitors to the site, and the most popular pages.

Please enable Strictly Necessary Cookies first so that we can save your preferences!